Water in the Jordan Valley: ‘It’s our life’

Our van rattled from side to side as it climbed the rocky road up the dusty hill. At the top of the hill we were met with the scattered remnants of a water tank, which until minutes before was storing one million litres of water – almost half the amount of water in an Olympic-sized swimming pool. This tank supplied water for Palestinian families, livestock, and farmland in the area. Without this tank, nearly 500 people now lack adequate water for their basic needs and livelihood. 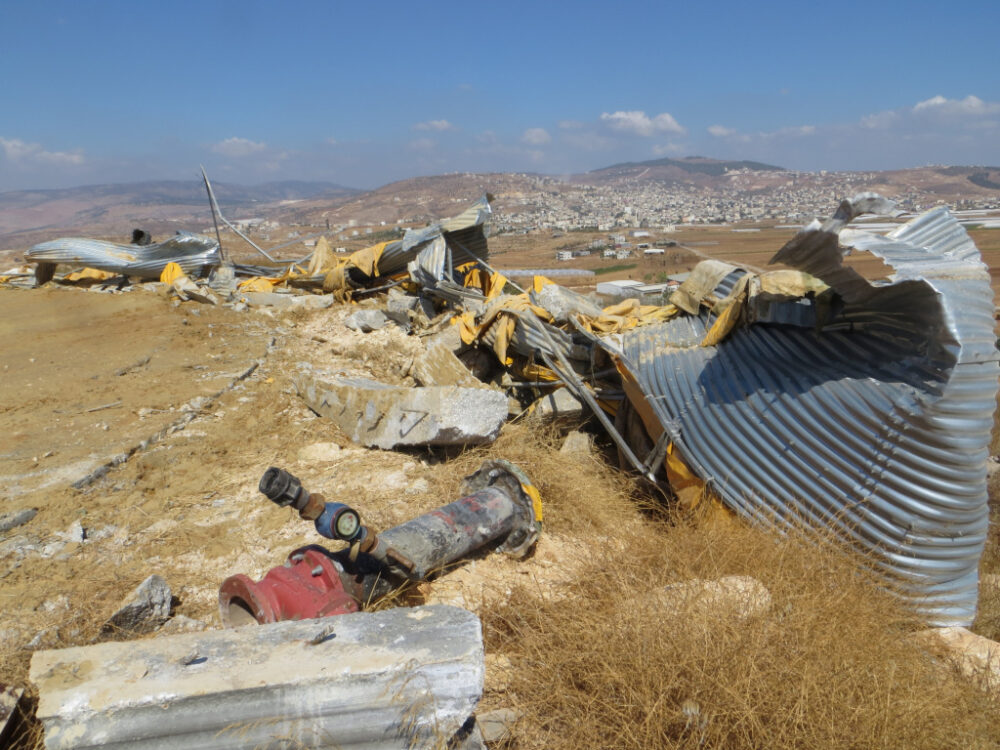 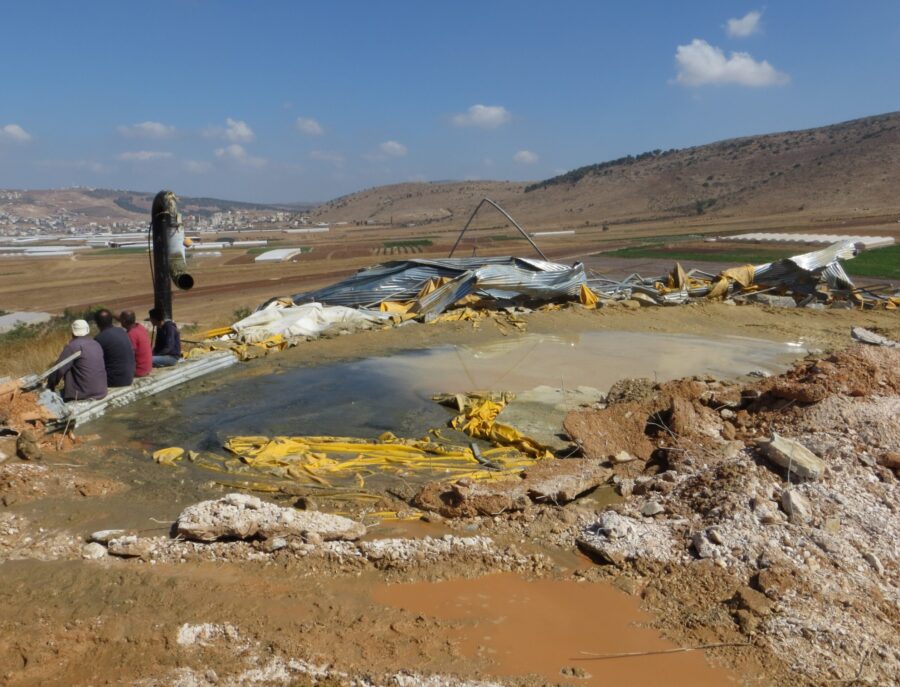 Men from the area sit on the edge of what was the base of the water tank near Khirbet Yarza. The tank supplied water to families, farmers, and grazing fields nearby in the Jordan Valley

This was just one of several water tanks in the Jordan Valley which the Israeli military demolished in the crucial days ahead of the planting season for Palestinian farmers. Three days earlier, a water tank the same size had been destroyed. This tank, near the village of Bardala in the northern Jordan Valley, provided water for 25 families – water they used in the home, to drink, and to nourish almost 100 acres of cucumbers, aubergines, and other crops.

The farmers were forbidden from the area while three power shovels and bulldozers worked – the Israeli military declared it a closed military area for 70 minutes while the tank was demolished. For reasons the farmers in Bardala could not understand, the soldiers also destroyed the beehives next to the water tank.

Communities in the northern Jordan Valley were not surprised at the timing of these demolitions. The coming weeks were to be the start of the planting season. But without water, farmers cannot plant. Without fields to sow and harvest, day labourers are left without an income.

The Palestinian farmers did not know what they would do without their main source of water. Many cannot afford the price of buying and transporting the amount of water they need for their families, let alone for farming their land. 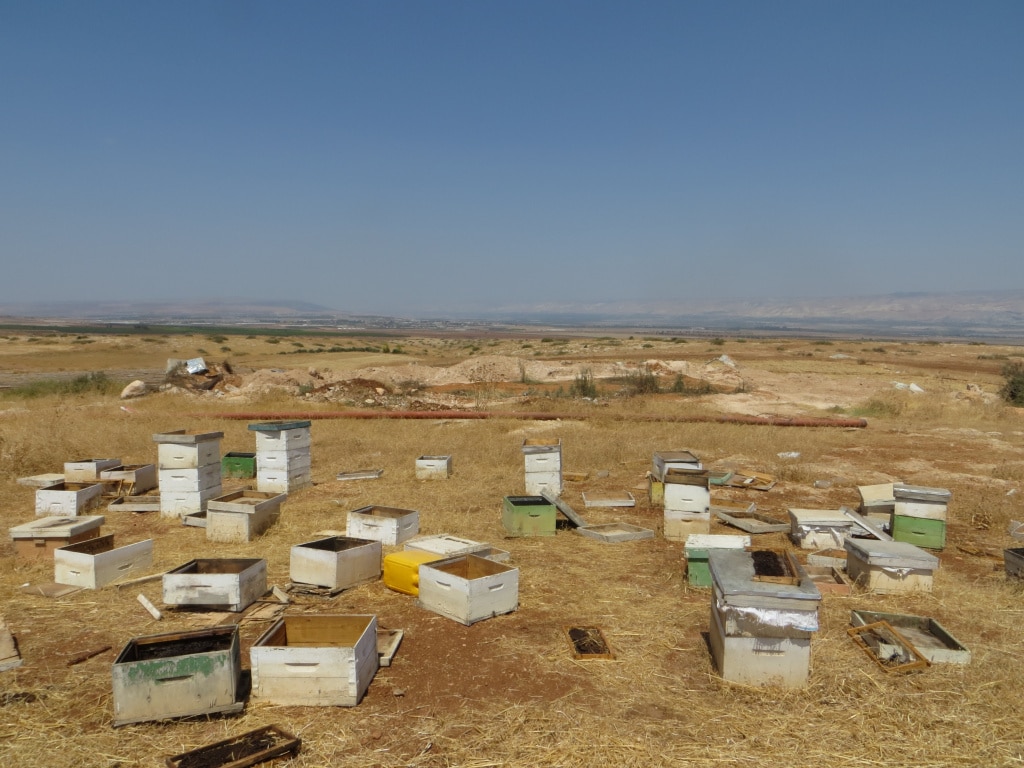 ‘It’s not your business, it’s our land’

A few weeks later, we met a man named Mursheid after his family saw 250 of their olive trees uprooted by the Israeli military. The military also destroyed four water cisterns that morning. Two of the cisterns held 50-70 cubic metres (50,000-70,000 litres) of water. The two other cisterns were empty, as the family had not yet planted olive trees in that area.

Mursheid and his family have proof of ownership of this land from the British Mandate (colonial) government, which began after World War One, as well as from the time when Jordan ruled the region from 1948. He asked a soldier why they were on his land, and the soldier replied, ‘it’s not your business, it’s our land.’ 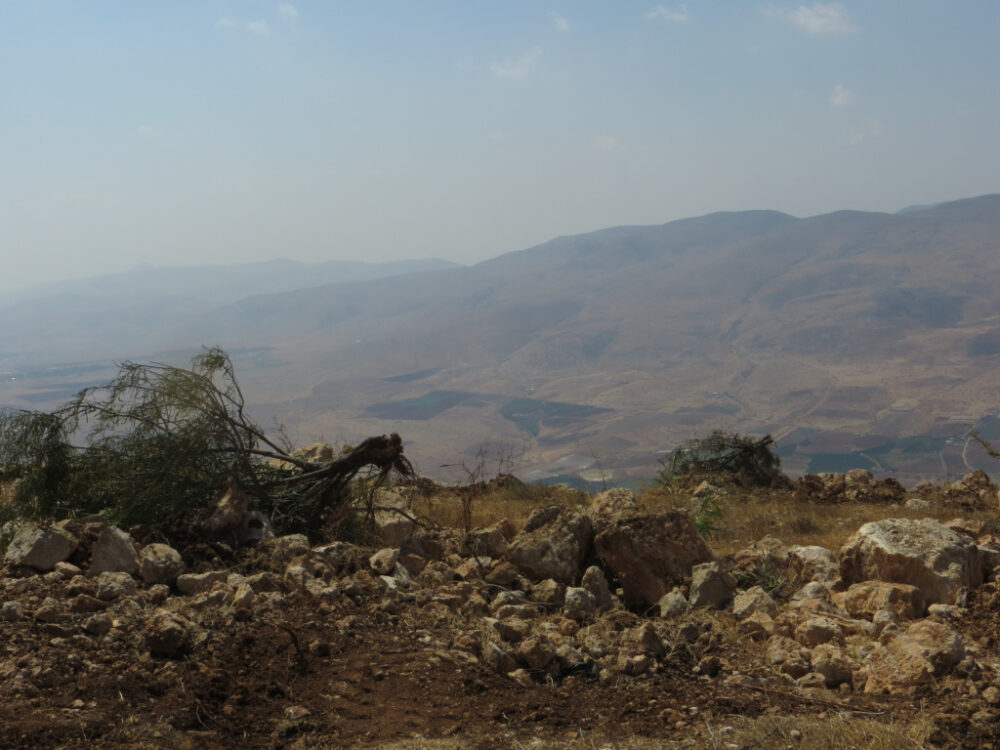 Tyre tracks leading to the demolished olive grove on the hills near Tammoun. 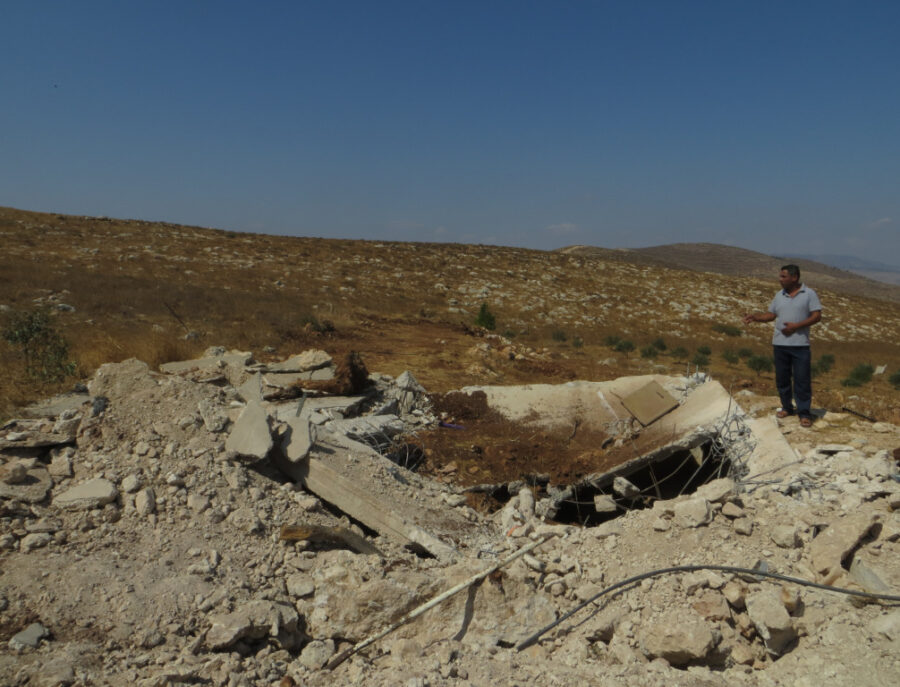 Mursheid stands next to a cistern, demolished and filled with dirt and uprooted olive trees from his family’s land. The few dozen olive trees that Mursheid and his family have left can be seen in the background.

‘I planted these trees, they have grown up with my children… We’ve been working for 7 years. They destroyed everything in 30 minutes’

The soldiers prevented Mursheid from continuing up the hill. They took his ID and made him wait for an hour under the summer sun. They also confiscated phones and cameras from him and the other community members present, returning them only when the demolition was complete.

When Mursheid was allowed to get to his land, he found that not only were the cisterns destroyed, the Israeli authorities had also taken some of the uprooted olive trees and thrown them into the cisterns, ensuring that the cisterns (if the family could afford to rebuild them) would be more difficult to clean and use for storing fresh, clean water. Mursheid estimated that he would lose around 60,000 shekels (around 13,300 GBP) just for the trees and olive oil that would have been produced.

We look across the valley where we can see clusters of square white houses on a hilltop. This is a housing development known as a settlement, built exclusively for Israeli citizens on occupied land and illegal under international law.

Israeli human rights organization B’Tselem remarks that the Israeli occupation policies and practices of controlling water and other natural resources are ‘a means of dispossessing and controlling Palestinians in the West Bank’.

This is a felt reality for farmers, shepherds, and families in the Jordan Valley. If there is no water, there is no way to feed families, crops, or livestock. Without their water supply, the farmers and labourers in Khirbet Yarza and Bardala went without a harvest – and an income – this season. For Mursheid, he will somehow find a way to transport water tanks up the remote hilltop to keep his remaining 30 olive trees alive. ‘It’s not a business,’ he said. ‘It’s our life.’

The West Bank was divided into Areas A, B, and C by the Oslo Accords in 1993-5. The Accords designated 87% of the Jordan Valley as Area C, where Israel has full security and civil control. The Israeli government justify the demolitions, stating that it is illegal for Palestinians to establish homes and resources in Area C without the consent of the Israeli authorities. Though this consent is rarely given.

Furthermore, Israeli control over Area C, as agreed in the Oslo Accords, was intended only to be an interim measure that would last no longer than five years. Nearly 20 years later, Israel has not withdrawn and continues to occupy Area C and the wider West Bank. Under international law, Israel is an occupying power and as such has responsibilities to protect the population in the occupied territory:

‘Objects essential for the survival of the population should not be attacked, destroyed, removed or rendered useless and extensive destruction and appropriation of property, not justified by military necessity and carried out unlawfully and wantonly, amounts to a war crime.’

'Any destruction by the Occupying Power of real or personal property belonging individually or collectively to private persons, or to the State, or to other public authorities, or to social or cooperative organizations, is prohibited, except where such destruction is rendered absolutely necessary by military operations.'

'To the fullest extent of the means available to it, the Occupying Power has the duty of ensuring and maintaining, with the cooperation of national and local authorities.. public health and hygiene in the occupied territory.’