‘Every Friday lunchtime, a group of elderly Israeli women stand quietly for an hour on a central Jerusalem junction holding small signs and banners. Although quiet, their presence provokes a lot of hostility. Their message? ‘Stop the Occupation’. They tell us they have been called many names from fellow Israeli citizens including “Nazi whores”, “whores of Arafat”, “traitors”, as well as simply, “Christians” even though they are almost all Jewish.’ EA Belinda

Resistance to Israel’s occupation of Palestine takes many forms. From the rebuilding and replanting of demolished homes and trees to political art, music and theatre. From protests on the streets to legal challenges in the courts. It involves not just Palestinians but also Israelis who reject their government’s actions. 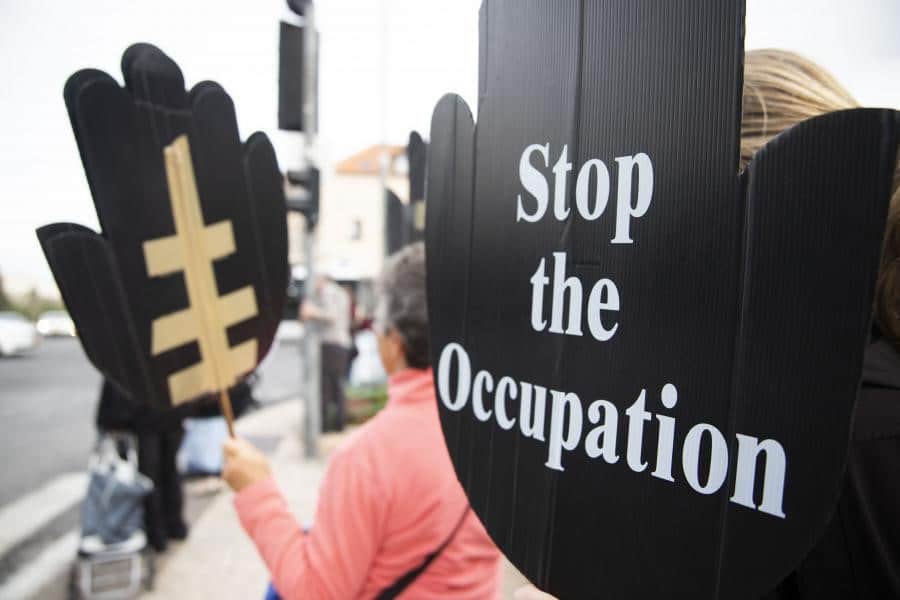 Disproportionate use of force

Nonviolent direct action from Palestinians resisting the occupation almost invariably attracts a disproportionate response from the Israeli authorities. For example, following mass protests against the forced eviction of Palestinians in East Jerusalem in June 2021, Amnesty International and others reported ‘ruthless excessive use of force’ against protestors, including the unlawful use of weapons, sweeping mass arrests and torture of ill-treatment of detainees.

‘Amnesty’s findings show that Israeli police actions were repressive and discriminatory, with police failing to protect Palestinian citizens of Israel from premeditated attacks by groups of armed Jewish supremacists, even when plans were publicised in advance and police knew or should have known of them… Police used unnecessary and excessive force to disperse Palestinian protests against forced evictions in East Jerusalem as well as against the Gaza offensive, while Jewish supremacists were allowed to organise demonstrations freely.’

Israeli soldier attacks a Palestinian man for protesting against the establishment of the Israeli Bustanei Hefetz industrial zone, built illegally on Palestinian land

‘Law enforcement officials, in carrying out their duty, shall, as far as possible, apply non-violent means before resorting to the use of force and firearms.’

UN Basic Principles on the Use of Force and Firearms

It’s not only Palestinian civilians who face harassment and violent attacks. In 2020, the UN Secretary General reported that ‘civil society actors, including human rights defenders and journalists, faced restrictions of movement, and some were reportedly subjected to harassment and intimidation, and in some cases assault, arrest and prosecution.’ The Secretary General went on to urge Israel to ‘ensure that journalists, human rights defenders and civil society actors are able to conduct their activities without harassment or being subjected to legal proceedings that are in violation of international human rights law, and that their rights are respected and protected.’

But little has changed: 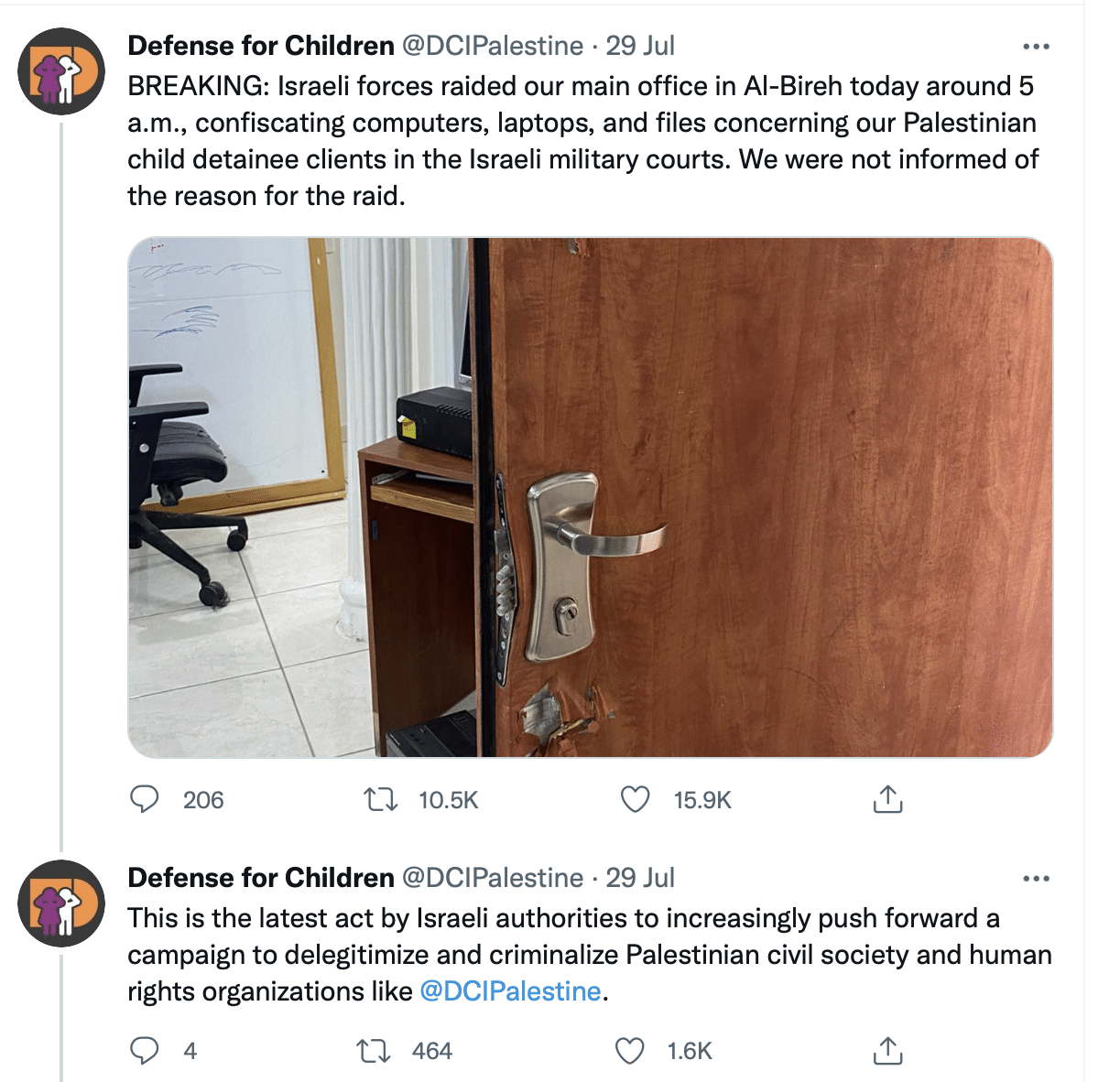 This was the tweet from Defense for Children International Palestine (DCIP) on 29 July 2021. DCIP are the Palestinian branch of the global children’s rights movement and are registered both with the Israeli Ministry of Interior and also with the Palestinian Authority, but that did not protect them from being raided. The files taken from DCIP’s offices by Israeli authorities relate to cases of Palestinian children detained and prosecuted in Israeli military courts, a system in which human rights abuses are well-documented.

In August 2021, UN experts condemned the raid and called upon the Israeli Government to fully respect the Declaration on Human Rights Defenders (1998), saying that an occupying power with a true commitment to human rights would ‘protect and encourage’ human rights defenders, and ‘not ostracize, harass or silence them’. 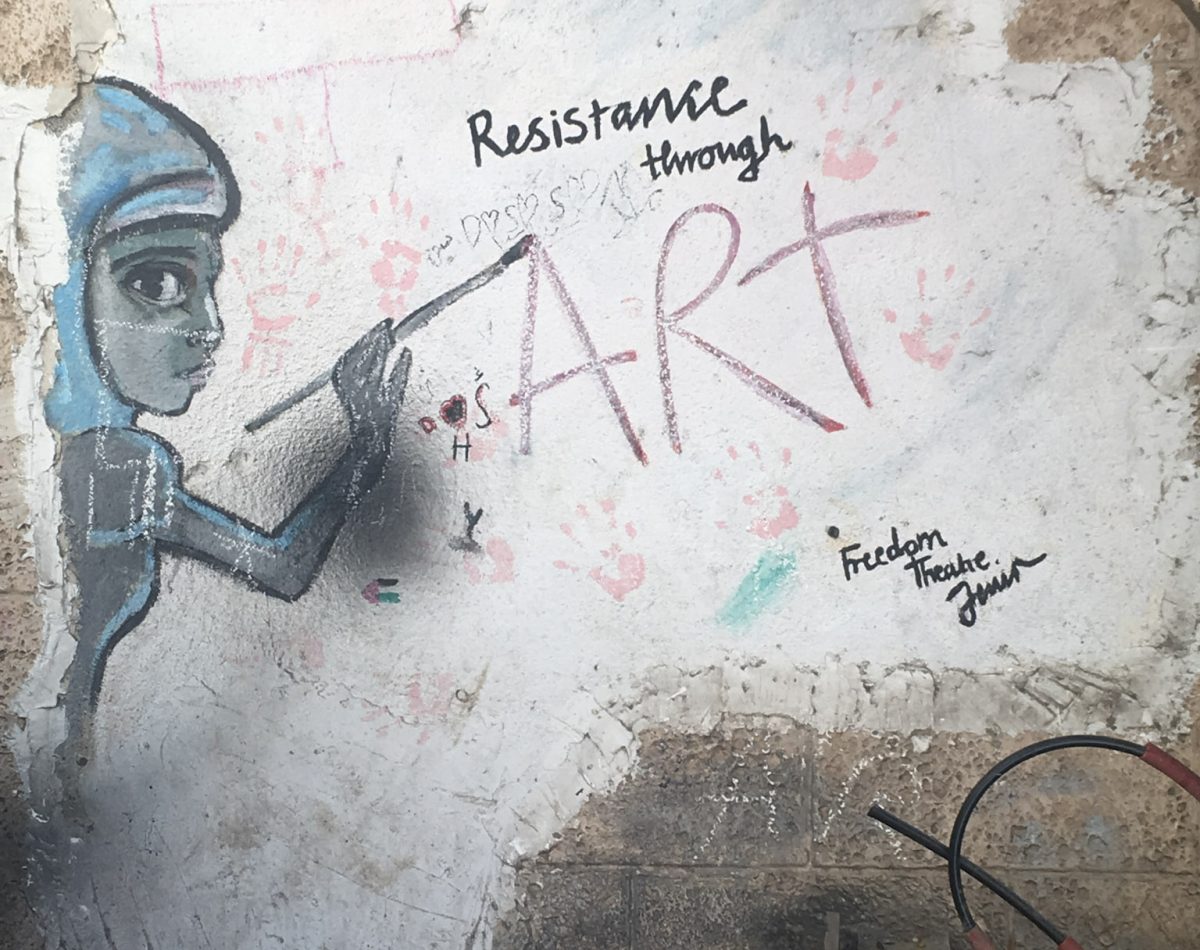 ‘Resistance through art’ – graffiti at the Freedom Theatre in Jenin, West Bank

The UN defines ‘civic space’ as the environment that enables civil society to play a role in the political, economic and social life of societies. But this space is shrinking in Israel and occupied Palestine.

Israeli and Palestinian human rights organisations have come under increasing restrictions from the Israeli government in addition to the restrictions already posed by the occupation. Some of the measures are legislative, for example aimed at preventing Israeli human rights organisation Breaking the Silence giving talks in schools about the behaviour of Israeli soldiers in occupied Palestine, or requiring Israeli human rights groups to declare foreign funding.

Some are administrative, such as expelling the country director of Human Rights Watch or hampering the work of the UN’s Office for the Commissioner for Human Rights (OHCHR) by refusing visas to its staff.

The new Israeli government has closed the department but its activities seem set to continue. In October 2021, the Israeli government designated six leading Palestinian human rights and civil society groups as ‘terrorist organisations’, effectively banning their activities. The designation authorises the Israeli government to close the organisations’ offices, seize their assets and arrest and jail their staff members, and it prohibits funding or even publicly expressing support for their activities. The announcement was met with widespread international condemnation. The UN said, ‘the decision is a further erosion of civic and humanitarian space and stands to significantly constrain the work of the six organisations which have worked with the international community, including the UN, for decades, providing essential services to countless Palestinians… To date, none of the UN agencies nor AIDA organisations have received written documentation which could serve as a basis for the allegations’. 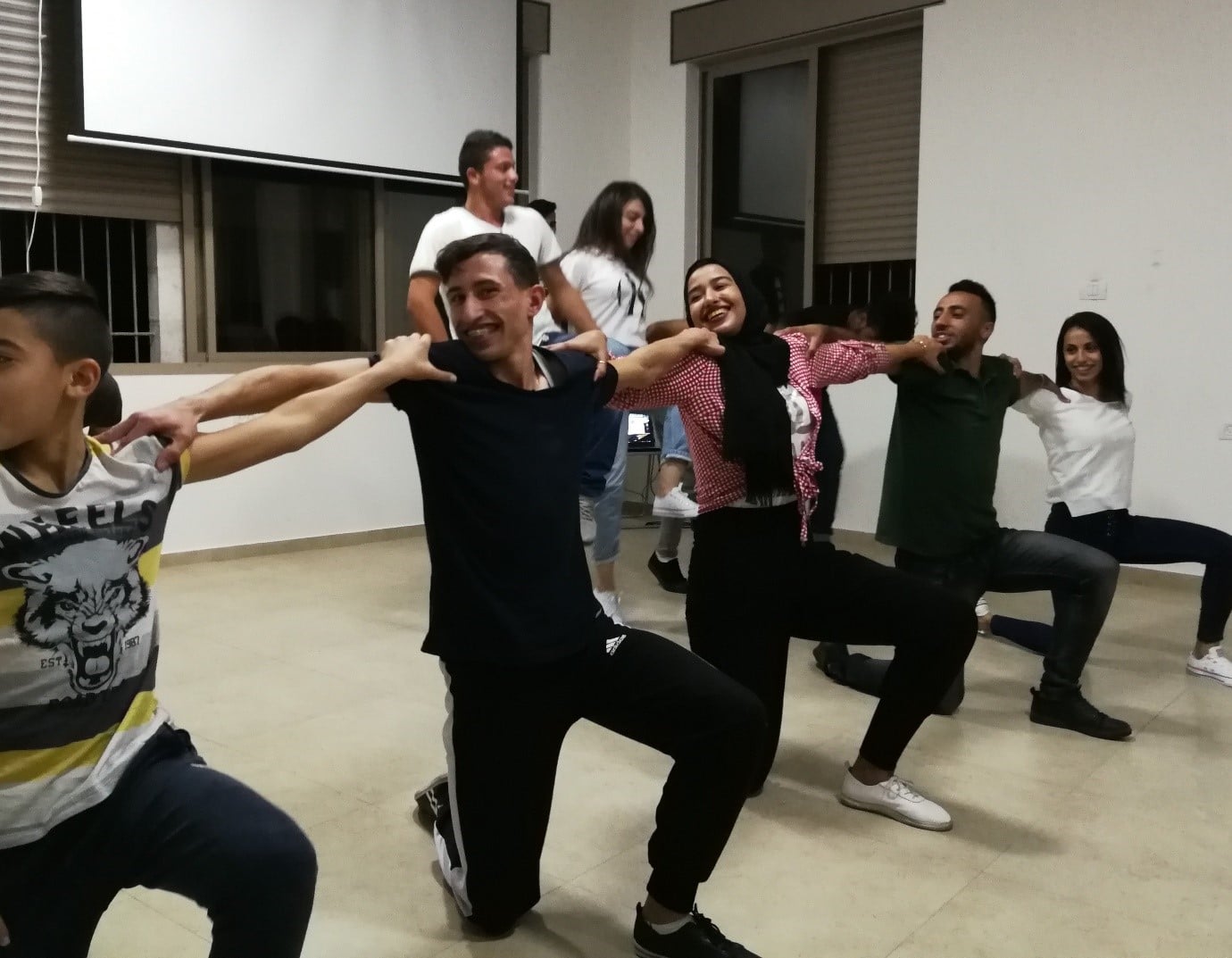 A young dance troupe from the Alrowwad Centre for Culture and Arts in Bethlehem use dance as a means of resistance. Read their story here. 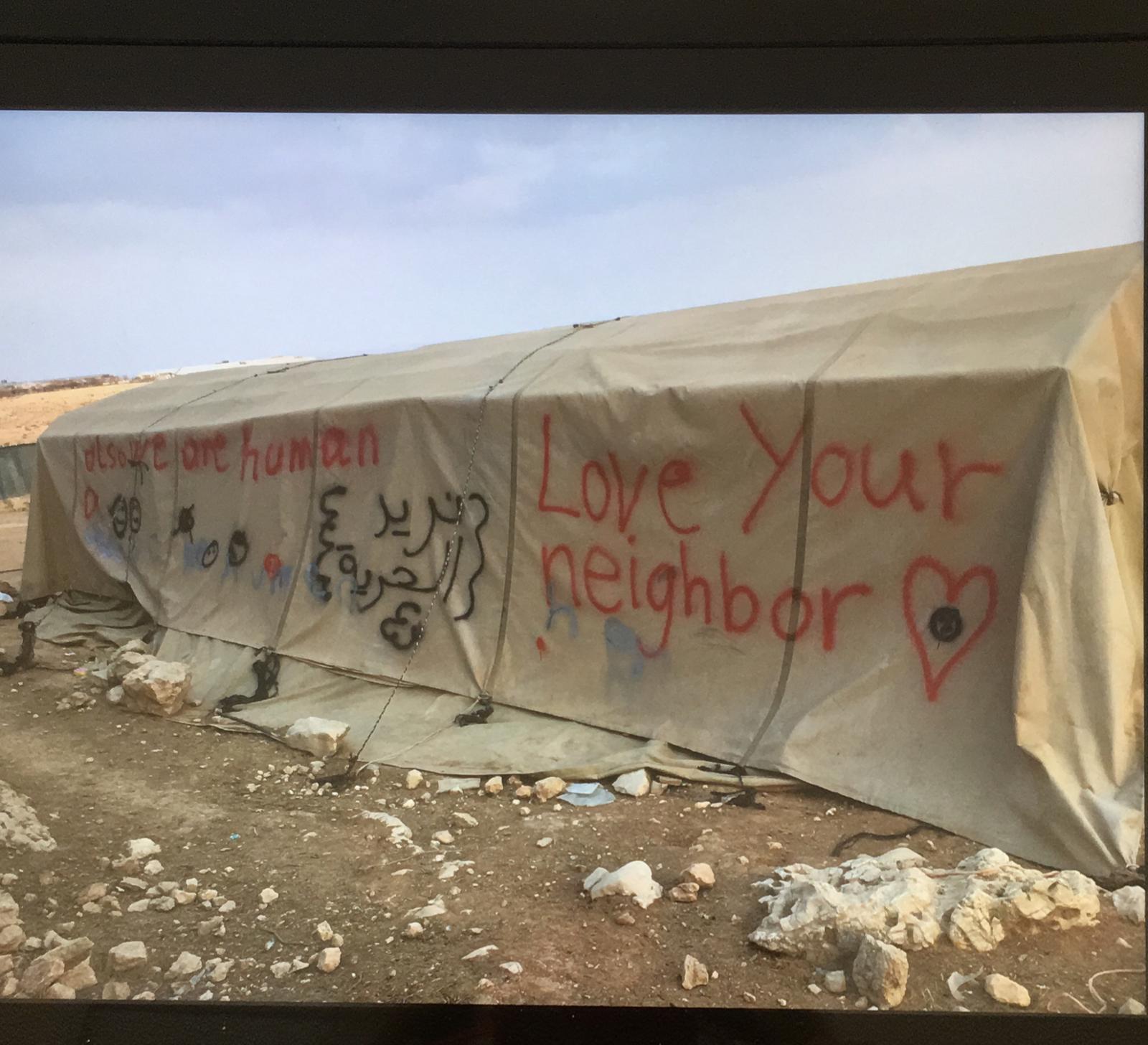 A community in the town of Susiya carry out a campaign to stop settler violence in their area. Read their story here.

The rise in ‘lawfare’

Alongside concerted efforts from the Israeli government to shut down the civic space, recent years have seen the rise of ‘lawfare’ attacks. In their report ‘The Alarming Rise of Lawfare to Suppress Civic Society: The case of Palestine and Israel’, the Charity and Security Network explains that lawfare ‘has emerged as a tactic against human rights, humanitarian, and peacebuilding organizations (and those that support them), as self-described ‘pro-Israel’ groups react to human rights litigation against Israeli officials by going on the legal offensive against human rights defenders’. The report outlines the legal cases that have been brought against Palestinian, Israeli and international human rights organisations by lawfare and disinformation groups, arguing that ‘collectively, these groups represent a major threat, not only to civil society organisations operating in Palestine, but more broadly…to civil society organisations and actors all over the world.’ 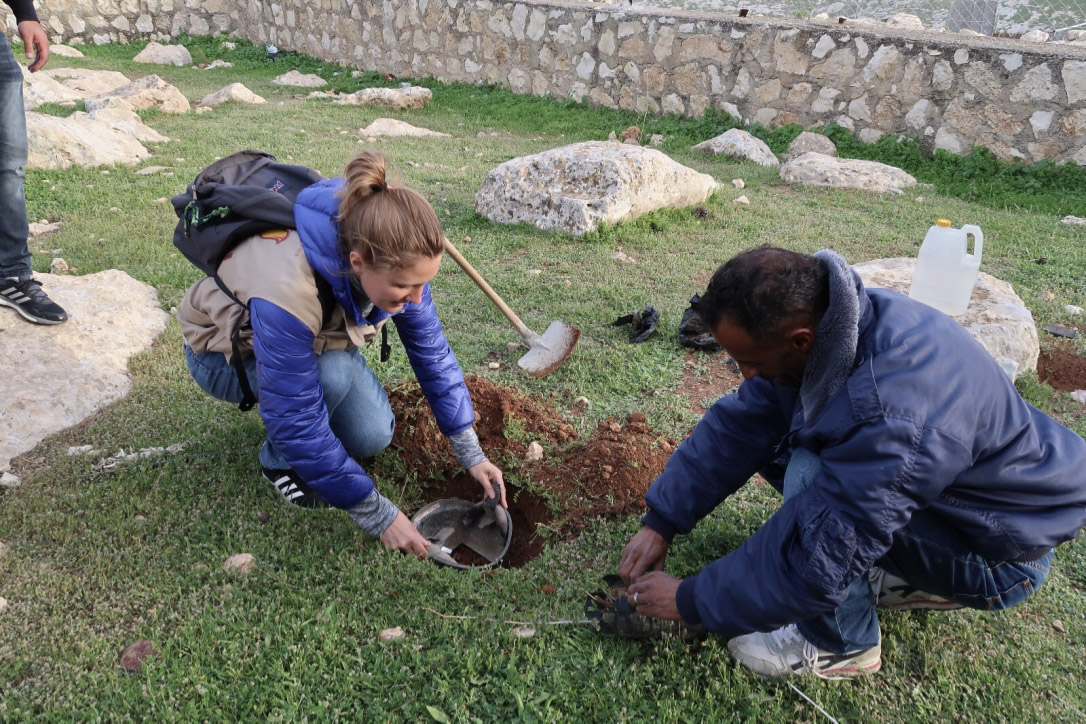 This harassment and intimidation of human rights organisations has had an impact. An independent international Commission of Inquiry into the 2018 protests at the Gaza border noted in its 2019 report to the UN’s Human Rights Council that some human rights defenders had been reluctant to cooperate with it and put this down to the ‘chilling effect’ of the hostile climate they faced. ‘Regrettably, the campaign to delegitimize human rights defenders and to undermine their work remains ongoing.’

Their comments came after an Israeli military court convicted Issa Amro, a Palestinian human rights defender and founder of Youth Against Settlements, a Hebron-based group which opposes settlement expansion through non-violent civil resistance. The charges against him dated back to 2010. 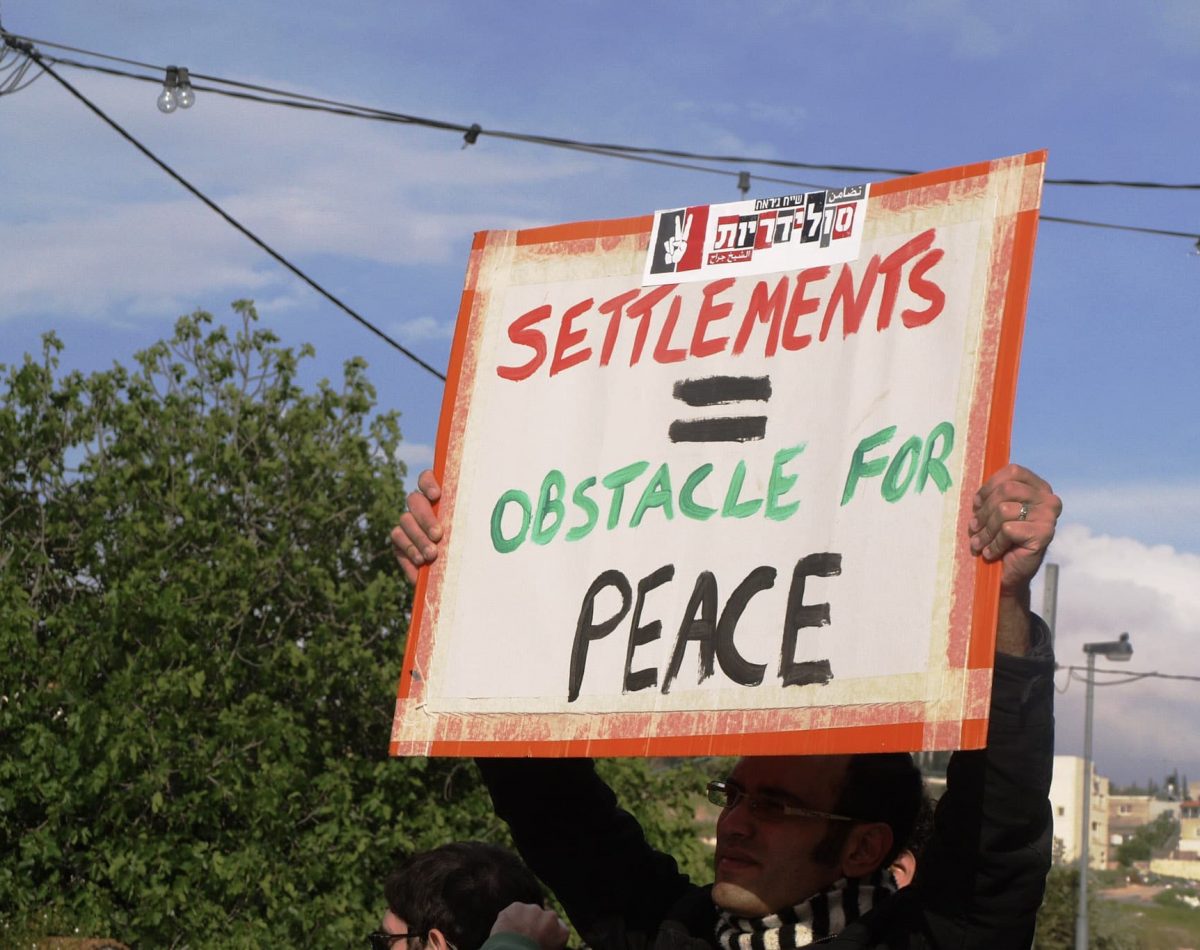 Repression from the Palestinian Authority

Amro also faced charges and harassment by the Palestinian Authority (PA) in 2021 after he criticised it in comments on Facebook. This action by the PA was not a one-off. Amnesty International and others have criticised the PA for its repression of peaceful protest and the targeting of human rights defenders who criticise them.

The death of a prominent critic of the Palestinian Authority, Nizar Banat, has thrown a spotlight on the behaviour of PA forces as a trial began in late September 2021 of 14 PA security officers charged with beating him to death in custody.

A report on Palestinian politics points out that Palestinian human rights organisations play a significant role in the documentation of Israeli violations of human rights and international humanitarian law, but that they also play a crucial role in monitoring the practices of the Palestinian authorities in the West Bank and Gaza.

A vibrant civil society is essential if Palestinians and Israelis are to achieve a just peace with freedom, dignity and security based on international law.

'Everyone shall have the right to freedom of expression; this right shall include freedom to seek, receive and impart information and ideas of all kinds, regardless of frontiers, either orally, in writing or in print, in the form of art, or through any other media of his choice.'

'The right of peaceful assembly shall be recognized.'