‘Everyone in the village is under extreme pressure’:
The ‘strategic goal’ of settler violence

‘The settlers tell us we are not allowed to leave our village to graze our herds because it is [Israeli] state land… Everyone in the village is under extreme pressure.’

We’re in the small Palestinian village of Zanuta, which has a population of around 100. It is perched on the top of a hill in the South Hebron Hills, or Masafer Yatta as the area is known locally. The main source of survival for Zanuta’s people is goats and sheep, and grazing their animals plays an important role in their culture and means of livelihood.

‘The settlers tell us we are not allowed to leave our village to graze our herds because it is [Israeli] state land… Everyone in the village is under extreme pressure’, local villager Suleiman told us as we sat down to drink a cup of ‘shay maramya’ (sage tea) before accompanying a shepherd with his herd of goats to their grazing lands surrounding Zanuta village.

From his warm greeting and smiles, you could be mistaken into thinking that all is well in the village. However, his attempt to maintain a semblance of normality is an expression of Palestinian ‘sumud’ صمود, or ‘steadfastness’. Suleiman and his family want to remain steadfast on land that has been farmed by his family for generations. 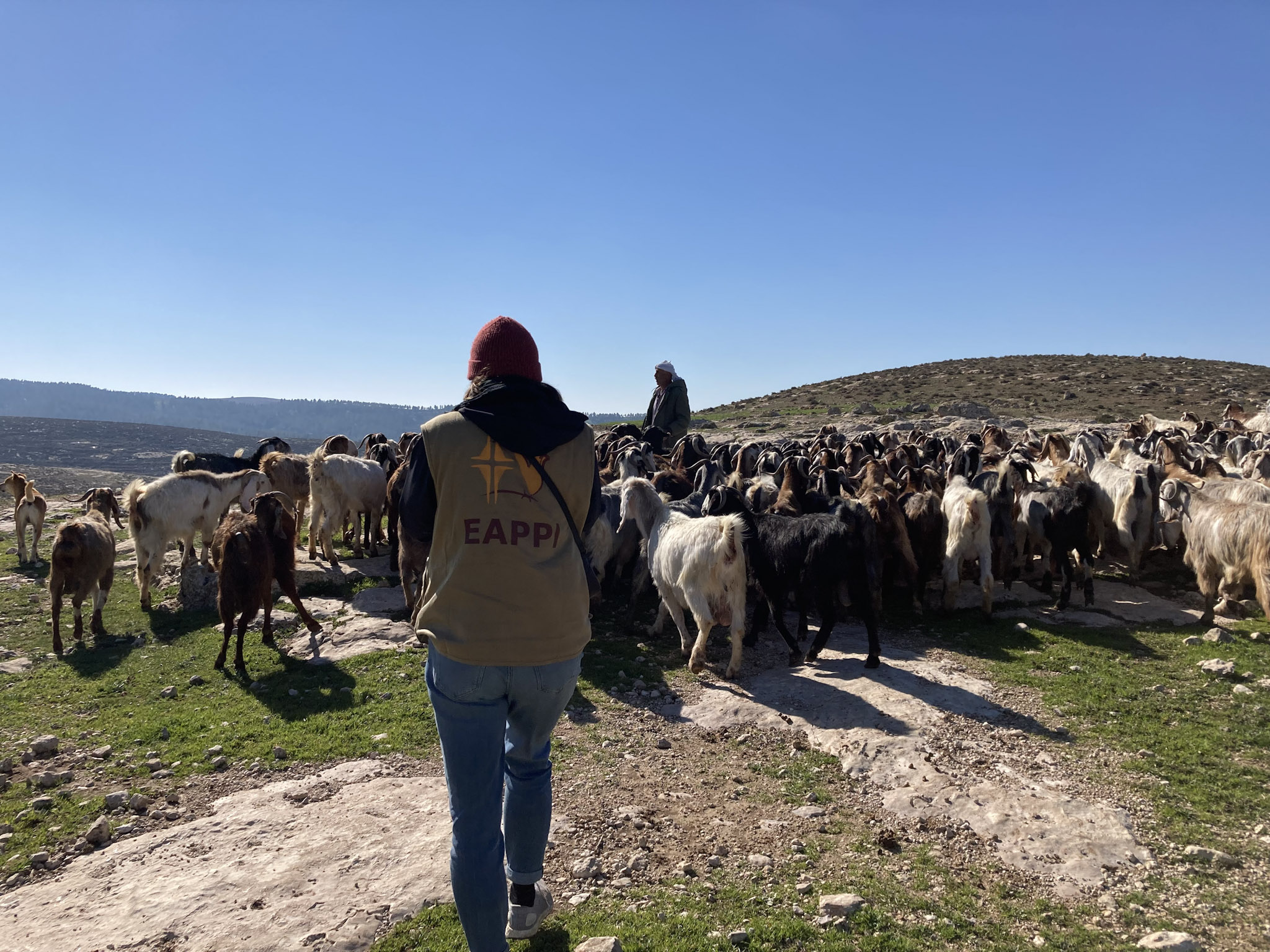 EA accompanying the shepherds of Zanuta

Zanuta is located in Area C of the West Bank. Area C is a vast area, which comprises more than 60% of the West Bank and contains most of its natural resources. More than two decades on from the Oslo Peace Accords (1993-5), where Israel agreed to a five-year transitional handover of the entire West Bank to the Palestinian Authority, Israel have not rescinded any control of Area C. Palestinians in Zanuta and the many other villages across this broad area continue to live under the full jurisdiction of a hostile army.

Within Area C, networks of Israeli settlements, settler outposts and farms have been established which are serviced by paved highways (some only open to Israelis), and which are connected to mains water and electricity supplies. The UN has repeatedly stated that these settlements are a violation of international law, but their development and expansion continues.

Moreover, the outposts and farms, established by settlers without planning consent, are considered illegal even under Israeli law but retrospective government approval is given in the majority of cases:

‘The state allows settlers to live, farm and graze livestock on land taken violently from Palestinians. Dozens of outposts and ‘farms’ – settlements for all intents and purposes, which were built without formal authorization by the government and without plans to enable construction in them – receive support from the Israeli authorities and remain standing. Israel has ordered the military to defend the outposts or paid for their security, as well as paved roads and laid down water and electricity infrastructure in most of them.’ 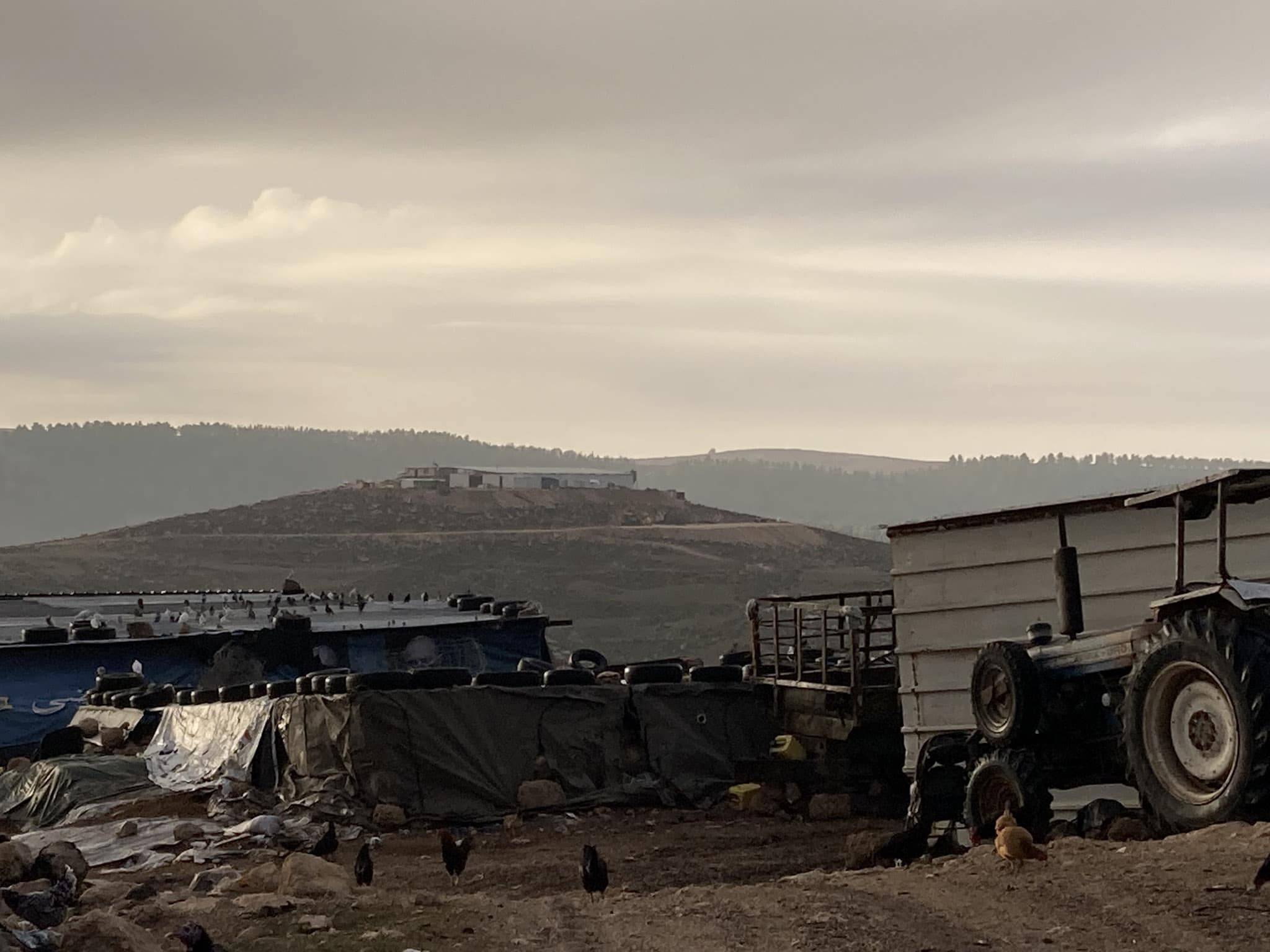 The new settlement farm overlooking the Palestinian community of Zanuta 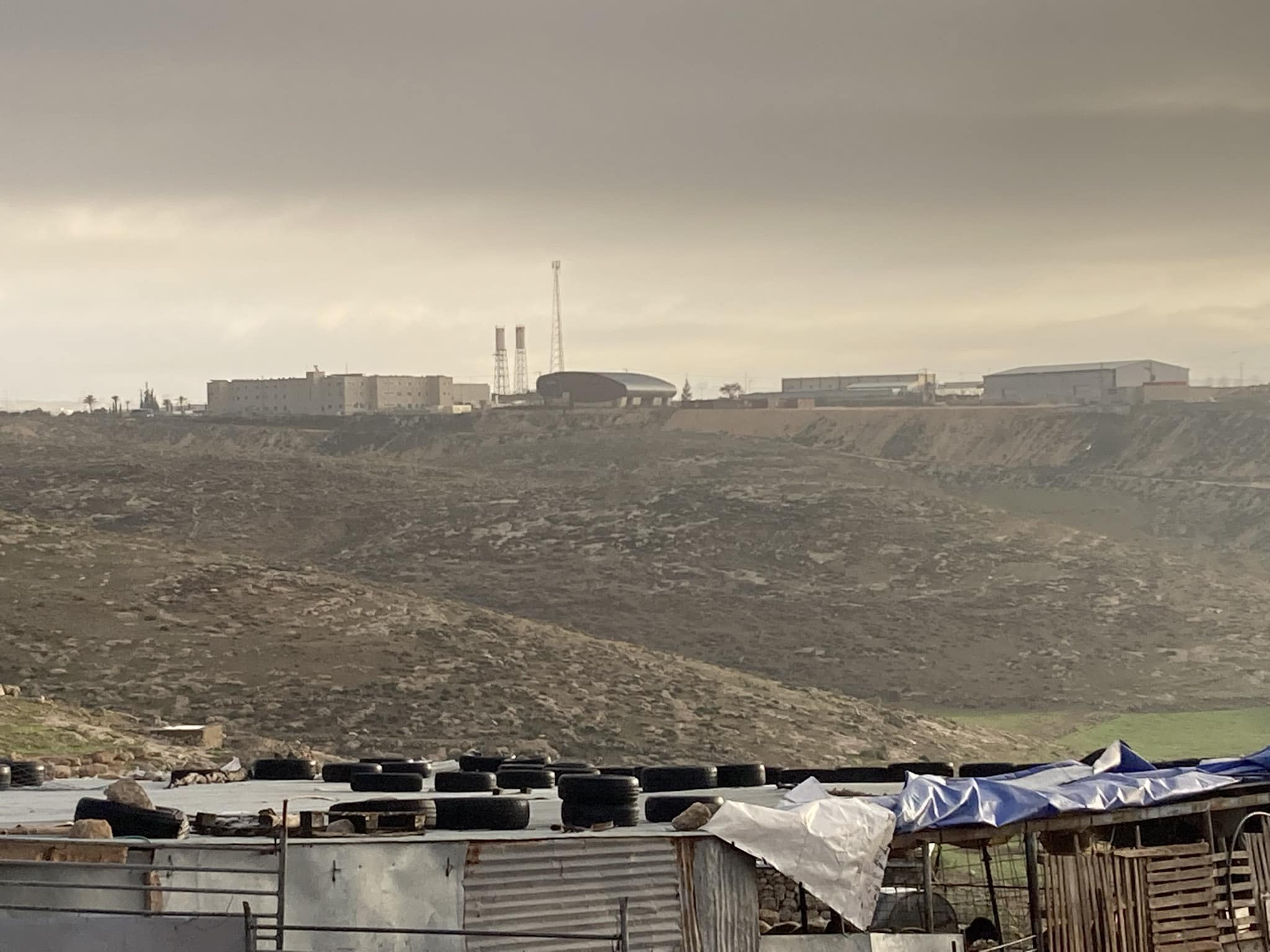 Suleiman described a recent incident where the settlers had approached the shepherds with dogs whilst they were grazing their goats and sheep. The settlers told them that their grazing land was ‘state land’ and that they had to leave. The shepherds called the Israeli police, who are responsible for security in Area C jointly with the Israeli military. The police responded by telling the shepherds not to approach the settlers, even though it had been the other way round.

Shortly afterwards, a military vehicle filled with four soldiers arrived and three of the shepherds were arrested and taken away to await a court date. The family anticipate that the speed of their release will likely be dependent upon whether they can pay a fine to the Israeli authorities. We were told that whenever the police are called and attend the scene, they go immediately to the settlers to discuss events and do not speak personally or take statements from the Palestinian shepherds.

‘The military avoids confronting violent settlers as a matter of policy … As a rule, the military prefers to remove Palestinians from their own farmland or pastureland rather than confront settlers.’

Not only do the shepherds in the village face harassment from settlers when they graze their herds, the settlers regularly harass the villagers during the night. One of the shepherds reported that a settler recently entered the village on a quad bike at nighttime, circling repeatedly.

The community of Zanuta is not the only community facing harassment and violence from settlers. This is widespread across the West Bank and the UN report that 2021 saw a considerable increase in the number and severity of incidents, exacerbated by a culture of impunity.

‘The settlers benefit from a two-tier legal system in which settlers who commit violence are rarely punished, while Palestinian suspects are frequently arrested and prosecuted by military courts… Settlers, unlike Palestinians, have the protection of the military and are rarely in danger of losing the land they live on.’

The shepherds that we spoke with in Zanuta all told a similar story. When they call the police because of settler harassment and violence against them, the police immediately speak with the settlers and military. This often leads to the arrest of one or more shepherds without any statement being taken from them. Israeli human rights lawyers, Yesh Din found that many Palestinians choose not to file a complaint due to fear of personal repercussions and the unlikelihood of justice. Where Israeli police do open investigations into settler crimes, just three percent end in conviction.

Breaking the Silence, an Israeli organisation comprised of veteran soldiers recently launched a campaign to make fellow soldiers aware that they have the authority and responsibility to detain violent settlers. In collecting testimonies, Breaking the Silence found that many soldiers seem to be unaware of this, despite it being contained in the Israeli Defence Forces’ (IDF) rules of engagement. When asked what authority soldiers have to arrest settlers, one military Captain replied, ‘I have no idea’. Another First Sergeant said ‘I don’t remember’.

‘The viewers need to know that successive Israeli governments benefit from… the criminality of the settlers, which leads to Palestinians being crammed into built up areas and their agricultural land can be taken over by Israelis.’

Back in Zanuta, we witnessed Israeli soldiers speaking with two settlers before the settlers left them and approached the shepherds and their herds with a dog. As the settlers approached, the soldiers disappeared behind a ridge of the neighbouring hill 300 metres away. We saw their heads appearing over the ridge occasionally. 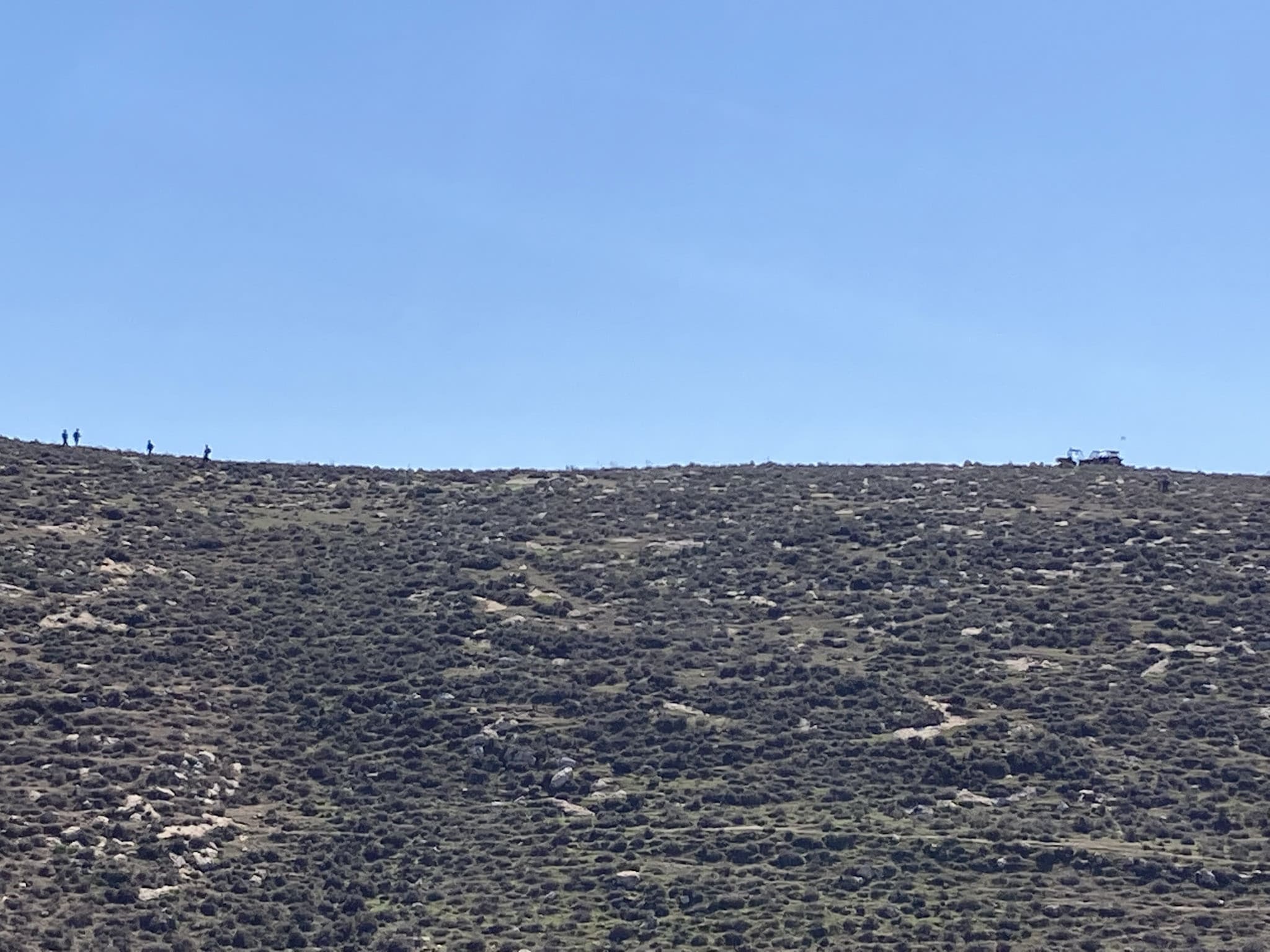 As one settler sat with his dog around 50 metres away, the other settler walked through the shepherds, herds and accompaniers attempting to frighten and threaten. Whilst this happened, the Israeli soldiers remained hidden behind the ridge. When the settlers returned to the soldiers, they stood on the hill ridge in full view again. 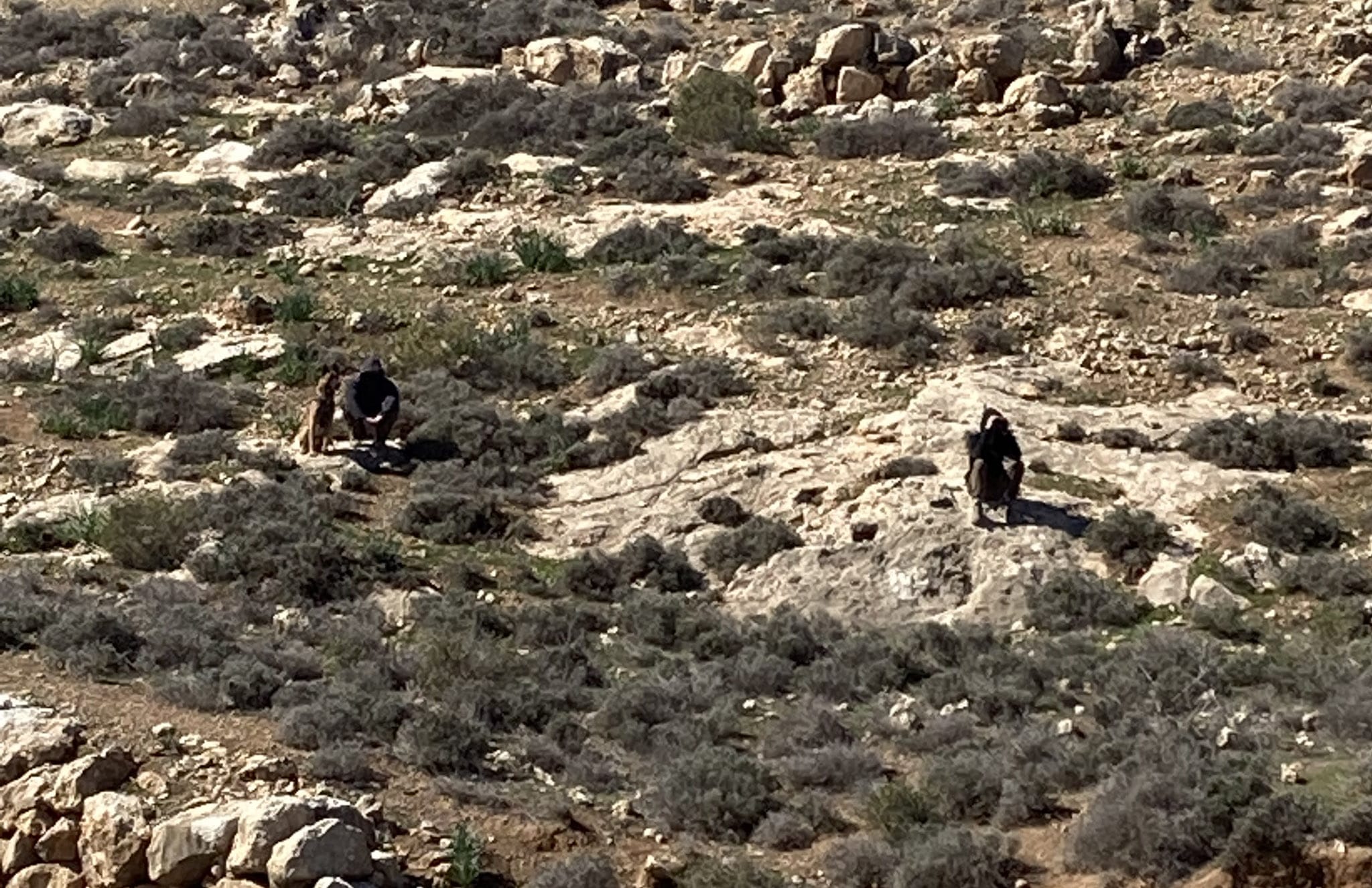 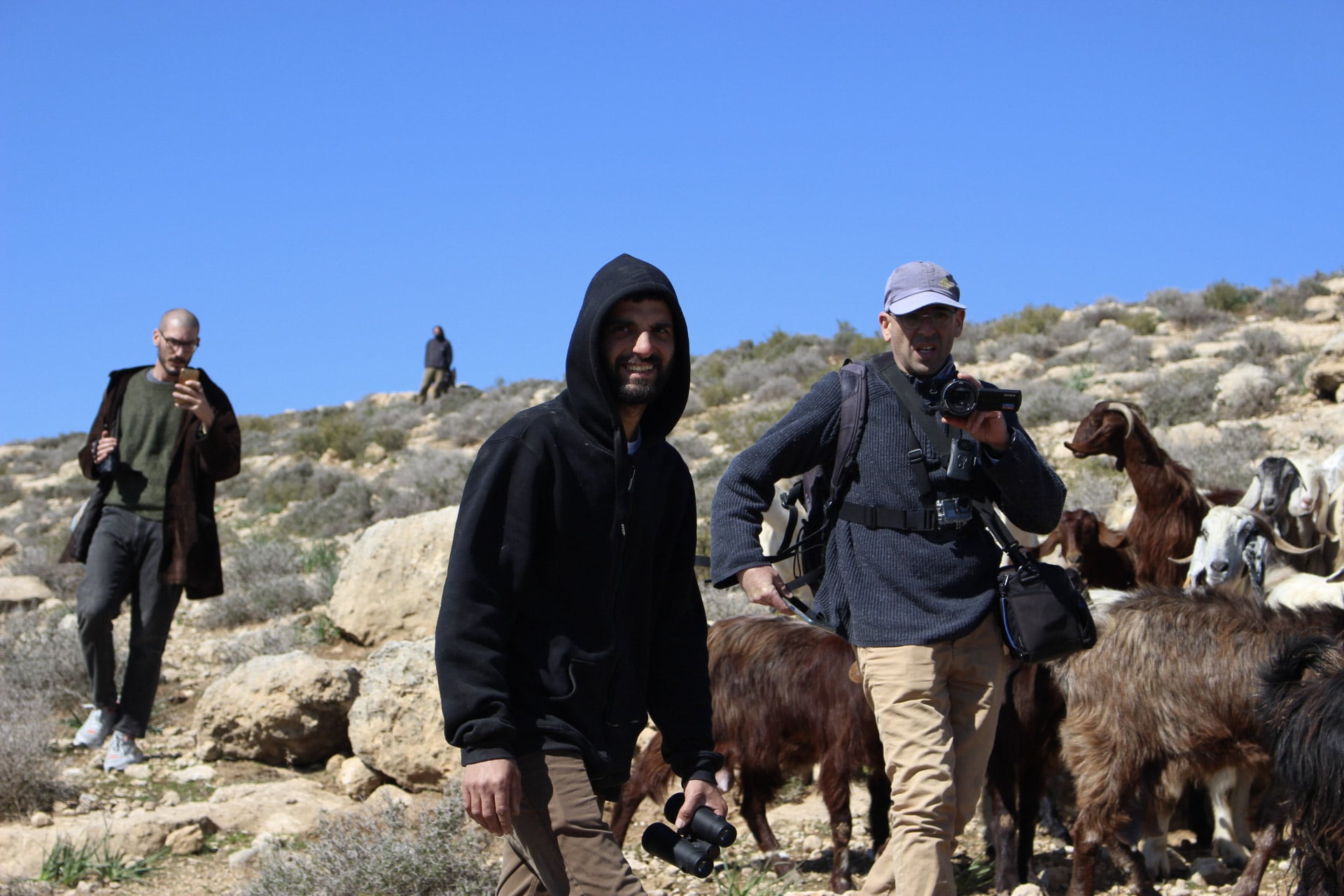 Settler approaches Zanuta shepherds and accompaniers and disturbs the flock

‘Protected persons... shall at all times be humanely treated, and shall be protected especially against all acts of violence.’