Sheikh Jarrah: A weekend of flags and contrasts

‘The Israeli protestors see the eviction threat as just one of the many injustices faced by Palestinians in their daily lives, and their protest is broader than the Sheikh Jarrah court case’

As has been custom, EAs gathered this Friday afternoon to stand in solidarity with Israeli activists who hold a weekly demonstration demanding an end to the occupation. The group stands on the roadside in the district of Sheikh Jarrah, opposite houses of Palestinian families who live under the threat of eviction by the Israeli authorities in a case that has been running in the courts since 1972.

This part of East Jerusalem was annexed by Israel following the 1967 Six Day War but it’s not recognised by most of the international community as being part of Israel. Before the Six Day War, the area was under the rule of the Jordanian government and the Palestinian residents under threat of eviction say that they first rented and later bought their homes from Jordan. Their claim is being challenged in the courts by Israelis who claim that the houses once belonged to Jewish families and that the area is part of an historic Jewish homeland. These Israelis demand their ‘right of return’, a phrase with uneasy echoes of the demands being made by Palestinian refugees who were forced to flee Israel in 1948. 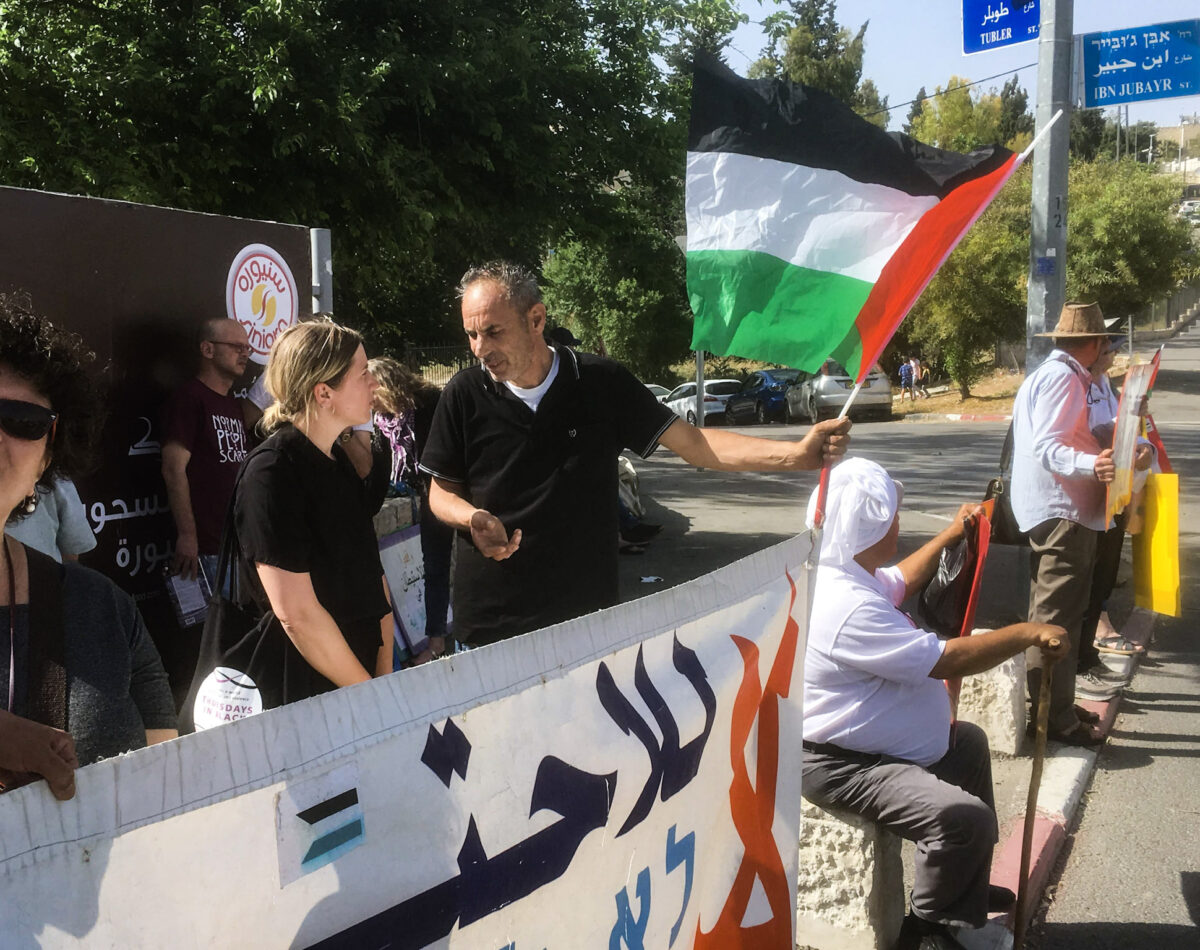 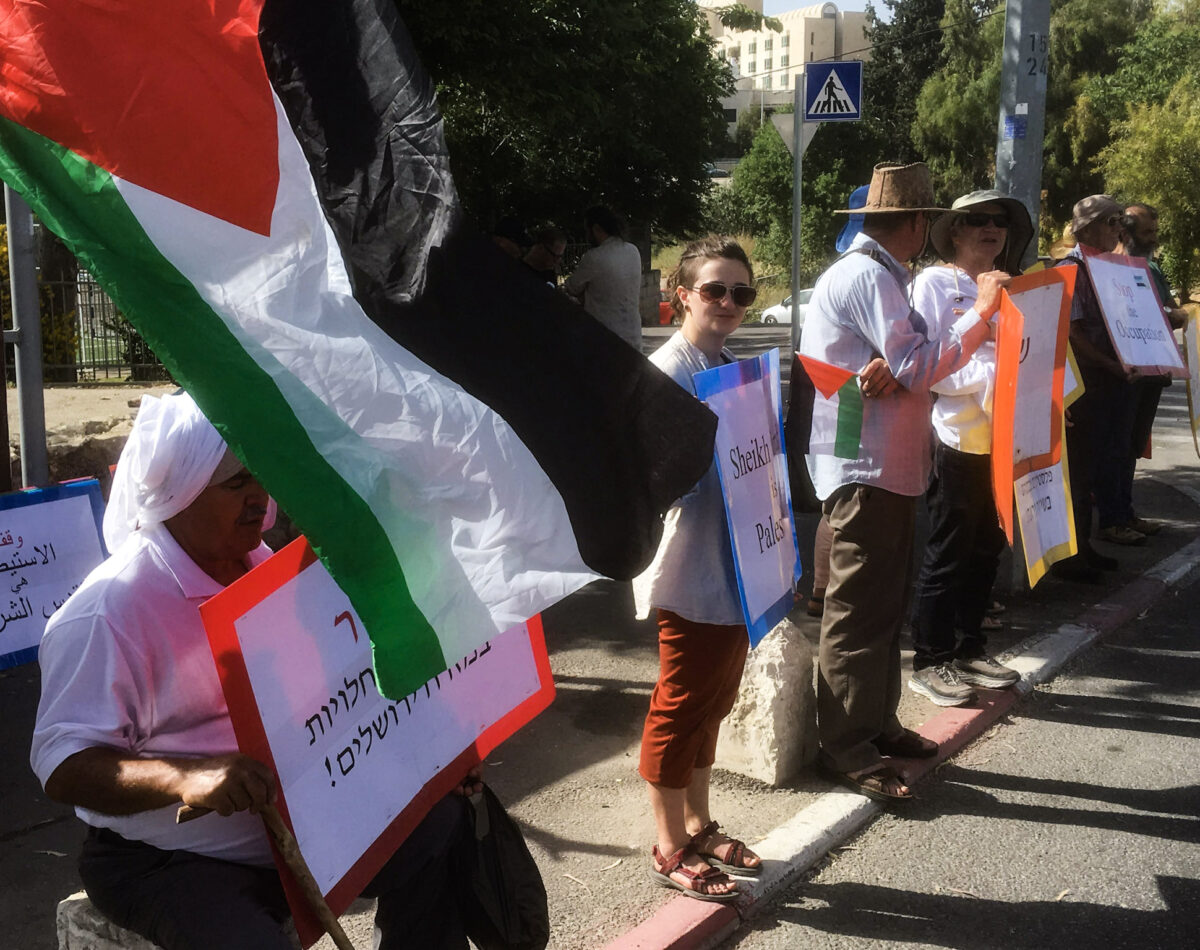 The Israeli peace activists see the eviction threat as just one of the many injustices faced by Palestinians in their daily lives, and their protest is broader than the Sheikh Jarrah court case, currently frozen until September. They want to see an end to the Israeli military occupation of East Jerusalem and the entire West Bank. These protestors face insults from some passing Israeli drivers, and this week the police came to demand that a Palestinian flag which was being waved was put away. Although the sight of Israeli flags is commonplace around Jerusalem, EAs have often witnessed Israeli police and military confiscating Palestinian flags or asking for their removal.

The protesters appear to be a cheerful and principled bunch, but it seems they find it hard to be optimistic. Their talk this week was about the difficulties that right-wing Israeli Prime Minister, Benjamin Netanyahu, has faced in trying to form a new coalition government, and the prospect of new elections in September. ‘But don’t think this will make a difference,’ said one of the protestors. ‘You will see on Sunday just what Israel society wants, and why “Bibi” (Netanyahu) has nothing to fear’.

Sunday was ‘Jerusalem Day’ (Yom Yerushalayim) which is an Israeli national holiday commemorating the ‘reunification of Jerusalem’ in the aftermath of the June 1967 Six Day War. The day is officially marked by state ceremonies and memorial services. Many of the streets around the Old City, just a few minutes’ walk from Sheikh Jarrah, were closed to traffic and to Palestinian pedestrians by metal barriers and a very heavy military and police presence. There were snipers on roof tops and on top of the Damascus Gate entrance to the Old City, through which the marchers would pass. There were police horses and military jeeps and more military hardware than is usual. 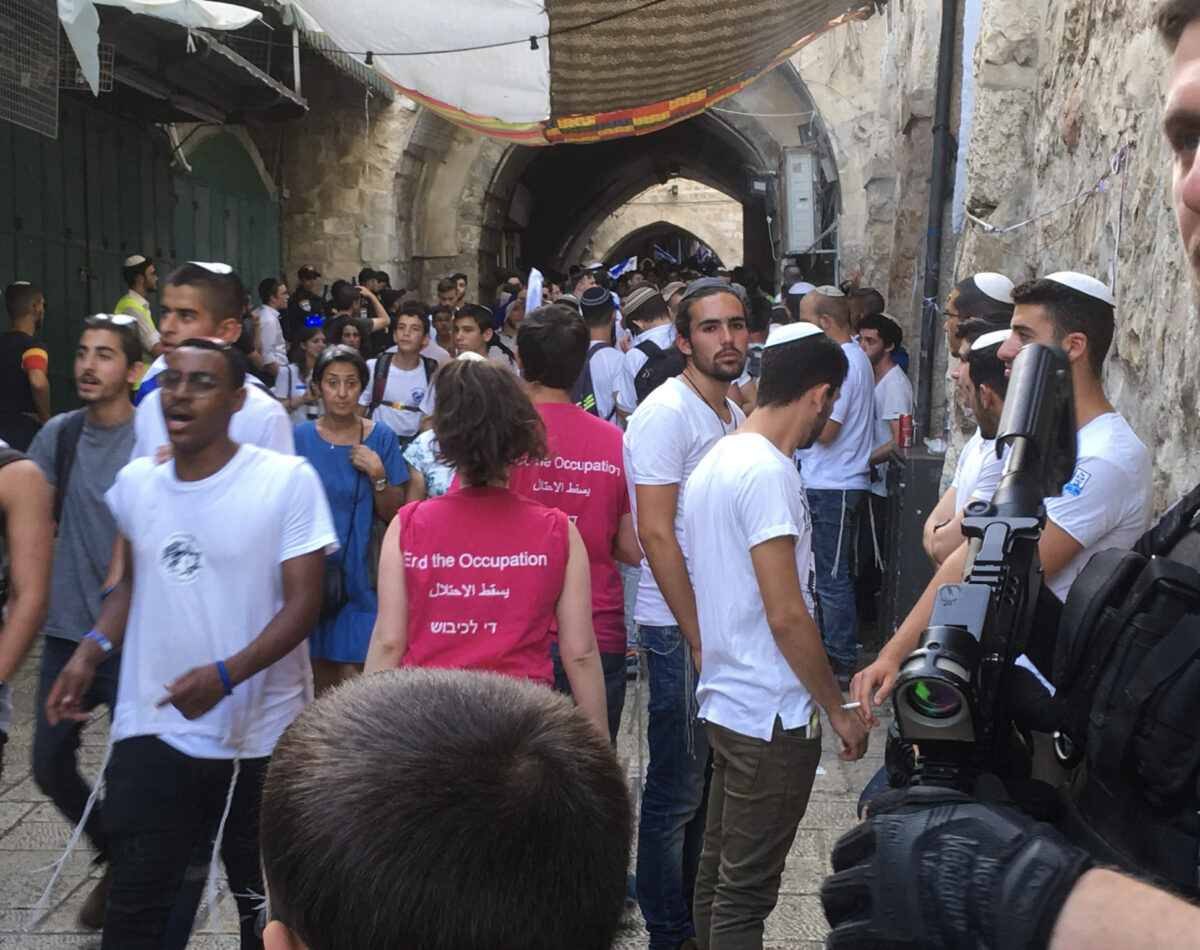 The purpose of these security arrangements was to allow access into the Old City for a flag parade by another section of Israeli society, who marched in their thousands. EAs were there to witness this parade too, and to provide a protective presence to the Muslim residents of the Arab Quarter of the Old City whose shops had been forced to close and whose streets were closed off as the two and a half-hour march passed through. The marchers, escorted by the military and police, who also lined the route, were marking the 52nd anniversary of the Israeli victory in The Old City which allowed Jews to once again pray at the Western Wall. According to the Israeli protesters we met at Sheikh Jarrah, the march has become increasingly nationalistic in recent years.

In contrast to the much smaller and peaceful demonstration at Sheikh Jarrah, this demonstration was loud. Large groups of young men (there were demonstrators of all ages, but the vast majority parading through the Damascus Gate were aged 16 to 30) waved their blue and white Israeli flags and danced and sang as they marched through the Old City to the Western Wall. They stopped in the narrow streets, in front of barriers behind which Muslim residents waited to get back to their own home and businesses, blocked by soldiers. The marchers chanted ‘death to Arabs, Muhammed is dead, and Jerusalem is ours’. We saw Israeli and international counter protestors moved away by the military as the voluble crowd marched through. 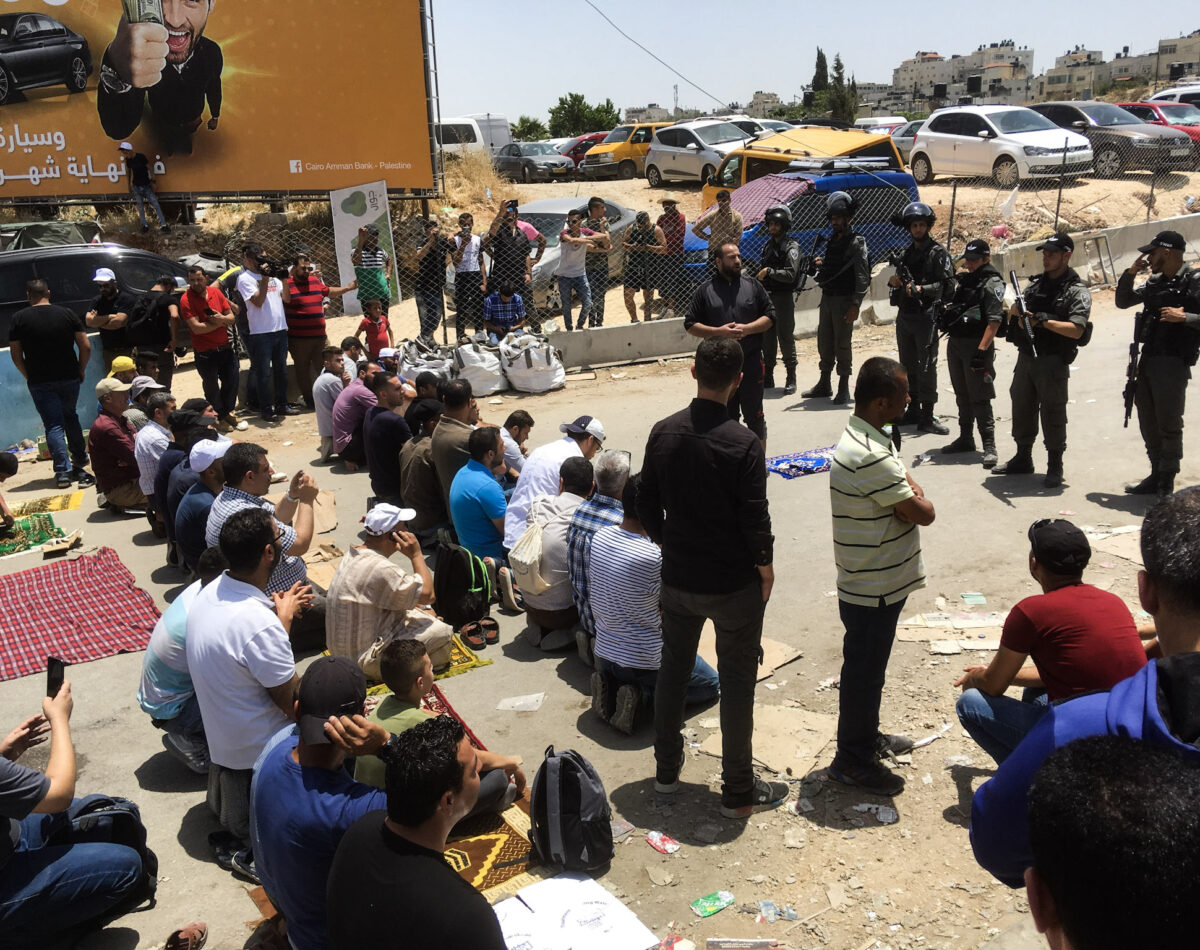 Queues at Qalandiya checkpoint on the last Friday in Ramadan 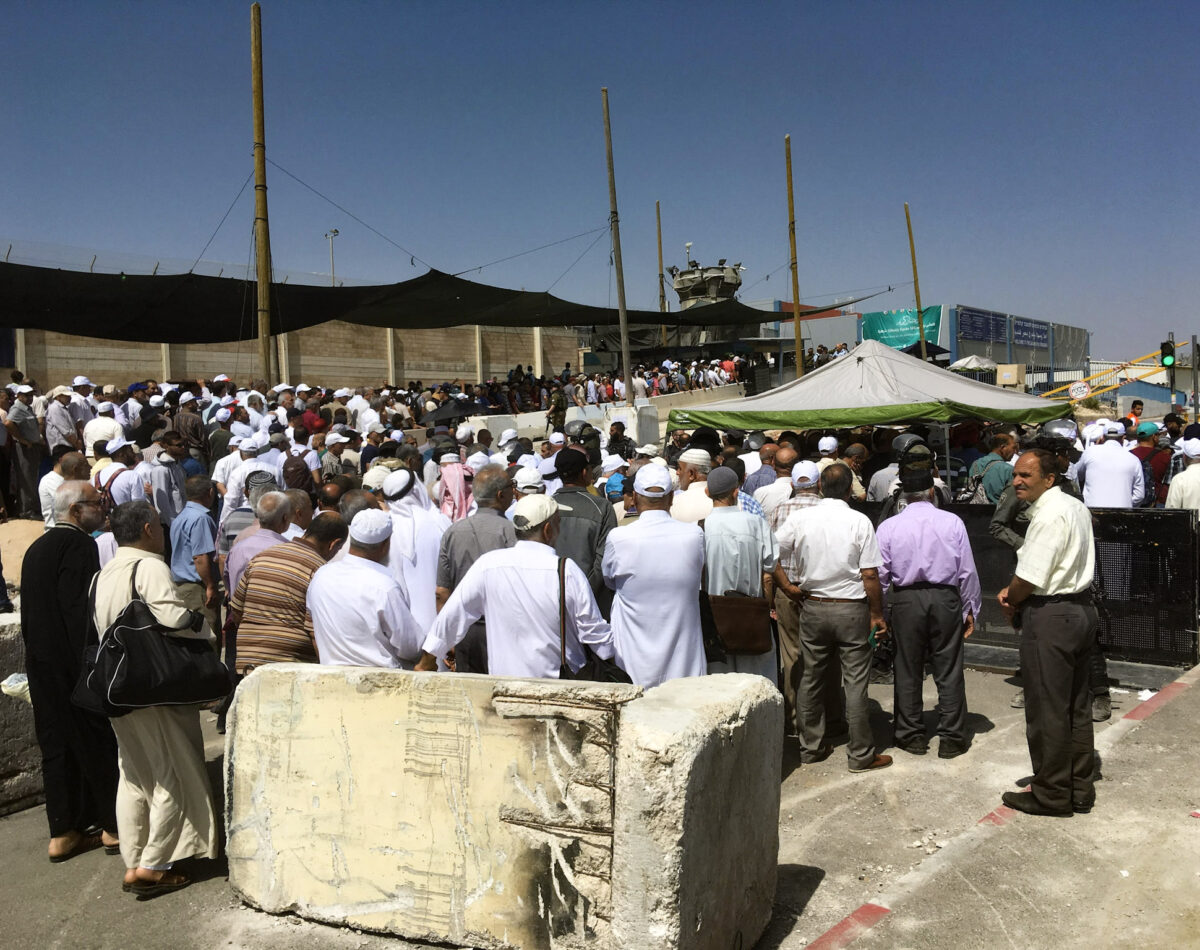 Queues at Qalandiya checkpoint on the last Friday in Ramadan

It is the last weekend of Ramadan and many Palestinians had tried to come into the Old City from the West Bank on Friday to pray in the Al Aqsa Mosque. EAs had been present at Qalandiya checkpoint – one of the main crossings through the Separation Barrier from the West Bank to East Jerusalem – to monitor this access to worship. The Israeli authorities denied access to East Jerusalem to all Palestinian men aged 16 – 40 years on Fridays in Ramadan, and we also observed many others outside these age categories being turned back at the booth where documents were checked.

The Israeli authorities say that these categories of would-be worshippers are not given permission to cross the checkpoint ‘for security reasons’. We witnessed as many as 500 Palestinian men denied access every hour and wondered, as they turned round and headed back to their homes in the West Bank, when the Holy Land would be allowed to be holy for people of all faiths.